Warning Graphic Photos Included. Can a person just burst into flames? Spontaneous human combustion (SHC) is a term that classifies the phenomenon of the combustion of a living human body without an apparent external source of ignition. I remember hearing of SHC several years ago as it was a highly debated topic. I had always accepted that it was a proven condition that a very few many people were susceptible to. However, the topic of spontaneous human combustion is still debated. Some authorities believe that the SHC phenomenon is real; others seek to disprove that theory. Worldwide, there have been approximately 200 documented reports of (SHC) over the last 300 years. For this post I’ve researched and highlighted 6 cases of spontaneous human combustion; you be the judge. 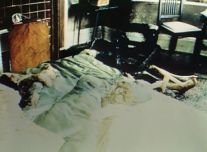 Henry Thomas: In 1980, 73-year-old Henry Thomas, was found burned to death in his home in South Wales. His entire body was incinerated, leaving only his skull and a portion of each leg below the knee. His feet and legs were still clothed in socks and the bottom portion of his pants. Half of the chair in which he had been sitting was also destroyed. As investigators muddled through the possible crime scene, they noticed that his feet were completely unburned. They also took note that the area surrounding his body was practically untouched by the fire. According to the police officer who arrived on the scene first, there was a fine mist of human fat covering all the surfaces in the room, which had evaporated in the extreme heat of the fire. The front panel of the TV was melted as well, despite being at least 15 feet away from the body. The only other things that burned were objects which had been in direct contact with the body – half of a chair, which eventually tipped and dropped the body to the floor.

Forensic officers of the day concluded that Thomas’ death was due to the wick effect. The wick effect is the name given to the partial destruction of a human body by fire. It suggests that a small external flame source, such as a burning cigarette, chars the clothing of the victim at a location, splitting the skin and releasing subcutaneous fat. When the clothing of the victim soaks up melted human fat and acts like the wick of a candle. This explanation is often given to those that don’t subscribe to the SHC theory.

ary Hardy Reeser “The Cinder Lady”: On July 2, 1951, at about 8 a.m., Mary Hardy Reeser’s landlady, Pansy Carpenter, knocked on Reeser’s door to deliver a telegram. Touching the door, she found the metal doorknob to be uncomfortably warm to the touch and called the police. Police and fire authorities carefully entered the apartment. Upon entering the home, they found Reeser’s remains completely burned into ash, along with the ashy remains of the chair on which she sat.

The only part of her left leg and foot (which was wearing a slipper) and her backbone remained, along with her skull. Plastic household objects at a distance from the seat of the fire were softened and had lost their shapes. Reeser’s skull had survived and was found among the ashes, but shrunken to the size of a teacup. The extent of this shrinkage was enough to be remarked on by official investigators and was not an illusion caused by the removal of all facial features (ears, nose, lips, etc.). The shrinking of the skull is not an exclusive feature of alleged cases of SHC, although the ‘shrunken skull’ claim has become a regular feature of other SHC cases. 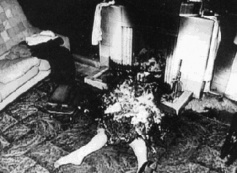 m the scene to FBI Director J. Edgar Hoover. He included glass fragments found in the ashes, six “small objects thought to be teeth,” a section of the carpet, and the surviving shoe. Even though the body was almost totally cremated, requiring very high temperatures, the room in which it occurred showed little evidence of the fire.

Robert Francis Bailey: At 5:19am on September 13, 1967, emergency services were called when a concerned citizen, walking to work noticed a bright light coming from inside a seemingly abandoned home in Lambeth, South London. Arriving at approximately 5:24 am, the fire department discovered the burning body of Robert Francis Bailey, a local homeless alcoholic. One of the responding firefighters reported that, as they entered the building, Bailey was lying on the bottom of the stairs half-turned on his left side with his knees were drawn up into his stomach. Bailey had been conscious as he burned to death and evidence suggests that he had been convulsing in agony as the fire consumed him. First responders found that Bailey’s pain was so intense that he had bitten into the solid mahogany post on the stairs. His teeth were embedded so deeply into the wood that his mouth had to be pried open by the fire department to remove his body. A firefighter described Bailey’s (SHC) episode as a four-inch slit in his stomach with a blue flame that was emanating from the slit like a blow torch. The flame was actually coming from the body itself, literally burning from the inside out. To extinguish the flame completely the hose had to be placed within the slit in Bailey’s stomach.

Fire damage to the property itself was minimal. The only fire damage in the house was on the floor, directly below where the body had been burning. Aside from the abdomen area where the fire had originated, Robert Francis Bailey’s clothes were intact and unaffected by the fire. Believing Bailey may have been saved; the fire department put out the flames almost immediately, once they pinpointed the fire’s origin. Robert Francis Bailey’s original cause of death was determined to be “asphyxia due to inhalation of fire fumes” but after reviewing the case further his death was deemed to have been due to “unknown causes”. Unwilling to recognize spontaneous human combustion as a reason for his death; investigators cite that Bailey’s alcoholism as being the probable contributor to the fire.

John Irving Bentley: Bentley was last seen alive on the 4th of December in 1966. Friends visiting his home wished him goodnight as they left at about 9 p.m. The following morning, meter reader Don Gosnell let himself into Bentley’s house, as he had

permission to do due to Bentley’s infirmity, and went to the basement to check the meter. While in the basement, Gosnell noticed a strange smell and a light blue smoke. He explained the smoke to be “somewhat sweet, like starting up a new oil-burning central heating system”. On the ground was a neat pile of ash, about 35 centimeters in height.

The floor underneath the ash was unmarked. Had he looked up, he would’ve seen a hole about a foot long square in the floorboards above. Intrigued, he went upstairs to investigate. The bedroom was smoky and in the bathroom, he found Bentley’s cremated remains. All that was left of the aged doctor was the lower half of his right leg with the slipper still on it. The rest of his body had been reduced to a pile of ashes in the basement below. His walker lay across the hole in the floor generated by the fire. The rubber tips on it were still intact and the nearby bathtub was barely scorched. Gosnell ran from the building to get help. He reached the gas company office screaming “Doctor Bentley’s burned up!” to his colleagues. Later on, his colleagues said: “he looked as white as a sheet”.

George Mott: Not much is known in the case of George Mott. What is known is that on the evening of March 26, 1986, the 58-year-old former firefighter apparently burst into flames and died. When he was found that night, what remained of him were mostly the ashes on the floor beneath his mattress, investigators would rule that the fire was caused by one of two things: a gas leak or “an electrical arc” that shot out from

an outlet onto Mott and set him on fire. However, there wasn’t any evidence found to support either claim. To the professionals that investigated the case, Mott was a firefighter who burned to death in his own home. A victim of just an unfortunate, semi-poetic coincidence. Even firefighters have to die in one way or another.

Helen Conway: On November 6th, 1964, Helen Conway from Pennsylvania was babysitting her grandchildren. A neighbor that happened to be walking past her home spotted a huge flame through the window. Mrs. Conway’s granddaughter she raced back to her home with her to call emergency services. When the fire department arrived they were shocked to find half of her body incinerated but her lower legs, feet, and toes intact.

Neighbors told authorities that Mrs. Conway was a heavy smoker. Friends of the deceased woman also made mention that both her furniture and house robes had many 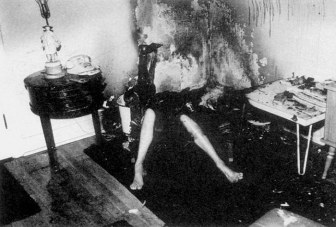 cigarette burns thus making her seem careless. Investigators soon found that despite her level of care when she smoked, it is impossible to cremate a human from a cigarette.

Fire investigators given the challenge of reconstructing the incident found that Mrs. Conway was alive at 8:42 am. Suddenly, the fire ignited at the base of the seated body and burned straight upward; fed by the fat in the torso. The grand-daughter made the fire alarm call within “three minutes” of leaving Helen Conway’s house. The firemen arrived to find her remains at 8:48 am. Fascinated by the speed in which the whole incident occurred, investigators concluded that it took approximately 6 minutes for Conway to burn to death while sitting in her chair. Joe Nickell, a fire investigator found that the fire must have been incredibly intense, similar to a grease fire in a kitchen. An assistant chief found that while searching through the dense smoke for the victim, he sank his hand “into something greasy” which proved to be the woman’s remains.

Phenomenon or not. Urban legend or reality. Fact or Fiction. The only real way to know if Spontaneous Human Combustion is real or something else is to experience it. Unfortunately, any person reported having ever experienced the phenomenon has taken the mystery of their experience to the grave.

Author, Scriptwriter and expert on Crime & Criminal Behavior; Andre Turner continues to educate, entertain and enlighten with posts that take readers to the darker side of humanity. With a new book on the horizon as well as other literary endeavors, Andre Turner is a name that not only continues to be a hot topic in literary circles. It is a name that will make its mark on pop culture in 2019. View all posts by reignmaker1911

This site uses Akismet to reduce spam. Learn how your comment data is processed.

The Darker Side of Evil Trailer

The Excursion of Perversion; The Depraved Travels Of Alton Coleman and Debra Brown

Seven of the Youngest Serial Killers Ever